DIKU Bits extra: ATARI WOMEN - retro gaming and the women pioneers behind them 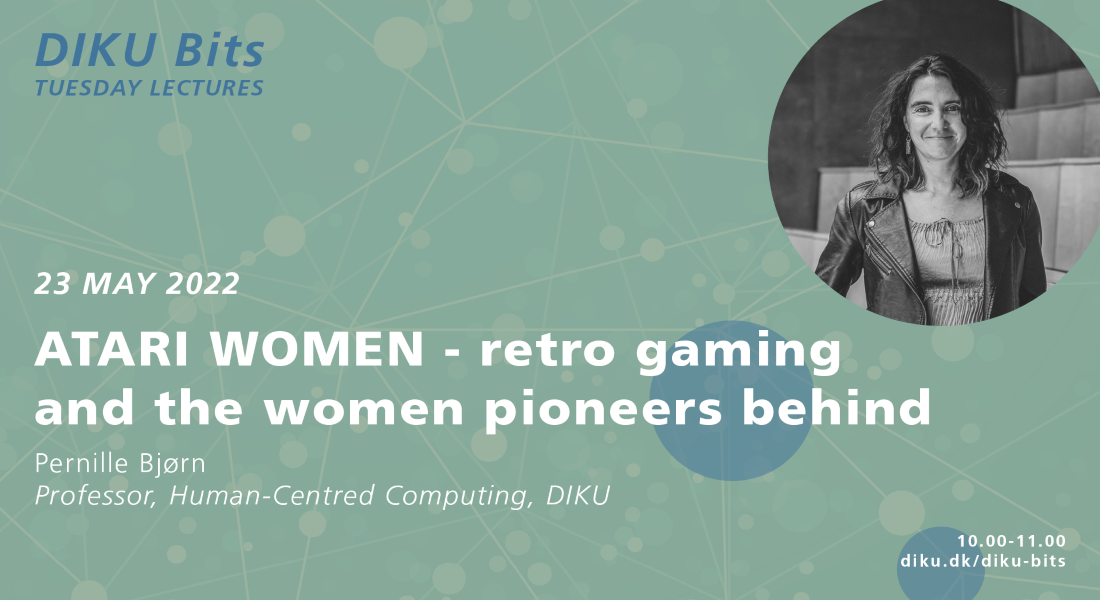 On 23 May the Human-Centred Computing (HCC) Section at Department of Computer Science, University of Copenhagen, will give an EXTRA DIKU Bits lecture.

Pernille Bjørn, Professor in the HCC Section at Department of Computer Science, University of Copenhagen.

ATARI WOMEN - retro gaming and the women pioneers behind them

Only few women choose a career in computer science. Since 2016, I been interested in understanding this strange phenomenon, with the purpose of making a difference and actively change the current situation. A core issue is not about attracting women to join computer science, but instead about changing the ways in which computer science is displayed and perceived from within. One fundamental tale about computer science is that it is closely linked to computer game development, as games have often been used as a way to demonstrate superior software and hardware capabilities within research labs. Further the popularity of games and gaming culture is prevalent and perceived predominantly as male in western societies. However, women played important roles when the gaming industry was being established in the 70s and 80s, but only few know their names and their stories. Focusing on the Atari gaming console, which has famously manifested the start of the gaming industry in the USA, we identified 29 CIS- and trans-women who made important contributions to Atari, and 13 allowed us to tell their stories. In this talk, Professor Pernille Bjørn will tell the stories of Atari Women celebrating the women, who made important contribution to Atari in the 70s and 80s . The purpose of telling the stories of Atari Women is to challenge the contemporary predominantly masculine representation of computer game development and re-work current historical (“retro”) celebratory memories of gaming to include hidden stories about women’s contributions. The aim is to shape current narratives about computing by re-writing the history of gaming through design activities. Finally, she will present intertextual design as an HCI design approach that 1) uses design to create new historical referents (connecting present contexts with people who carry past stories); and 2) harnesses nostalgia and fame to amplify the impacts of those referents on computing cultures today and in the years to come. Basically, re-writing the history of gaming is about stating that diverse gender identities are not new in gaming, they have always been there and they are still here. Atari women and their contributions must be remembered to change the future.

Pernille Bjørn is Full professor & Head of Department for Research at the Department of Computer Science, University of Copenhagen, Denmark (DIKU). In 2016, professor Bjørn initiated a research initiative (Femtech.dk) aimed at changing the gender diversity in computing eduction and profession by utilising Makerspace Methodologies. In September 2019, she returned from 1-year Fulbright Scholarship as visiting professor at University of Washington, in the HCDE department. During this year, she worked on uncovering the hidden stories of women in the early days of the gaming industry, and creating artefacts which allow these stories to become part of the digital archives and history of gaming. She is the co-founder of Atari Women (atariwomen.org), which have been displayed at Emerald City ComicCon2019, at the Living Computers Museum in Seattle 2019, and at the National Gallery of Denmark (SMK) in 2022. Besides research on gender diversity in computer science, Professor Bjørn research is within the area of Computer Supported Cooperative Work and Human Computer Interaction studying global software development (e.g. unpacking the dark side of global agile), healthcare information systems (e.g. exploring variation and standardization), and tech entrepreneurship (e.g. the inaccessible infrastructures for tech entrepreneurs in the West Bank).  She has a strong international profile having spent more than 4 years abroad at University of Washington, University of California, Irvine, Indian Institute of Management Bangalore, India, and Simon Fraser University, Vancouver Canada. Pernille Bjørn have served in numerous trusted high ranking research community positions such as paper co-chair for CHI2020 and CHI2021, ECSCW2018, and CSCW2016. Currently, her research interests focus on Cooperative Virtual Reality for Maritime safety training & The future of Hybrid work (ReWork - DIREC).

Which courses do you teach? MSc course: Collaborative Computing, Blok 2

Which technology/research/projects/startup are you excited to see the evolution of? Cooperative Virtual Reality

What is your favorite sketch from the DIKUrevy? “Lad det gro”; Frozen: “Let it go”, DIKU revy 2014