Will you participate in the Danish Championship in programming on 8 October? Strengthen your skills when DIKU hosts two master classes for UCPH students on Tuesday, 20 and Friday 30. September respectively.

Ex-Lambdabamse Jakob Bæk Tejs Houen and two other championship veterans, Jonas Klausen and David Lolck, who have both participated and performed well for DM in programming aka. NCPC will over two afternoons provide you with tips, tricks and skills on how to design the winning strategy, how to set the best class, how to split tasks in your team, and how to go for the winning course at DM in programming.

Jobindex is dropping by the DIKU canteen on Friday 23 September at 16-19 and hold a pre-event, where you can compete for prizes, and where you will be able to test the form. Sign up for the Coding competition/pre-event on 23 September.

The Nordic/Danish championship NCPC 2022 will take place on Saturday 8. October from 10-16 and is held in the fine Infosal in KUB north on the corner of Nørre Alle and Tagensvej. Not yet open for registration.

Place: A101 in HCØ, Universitetsparken 5 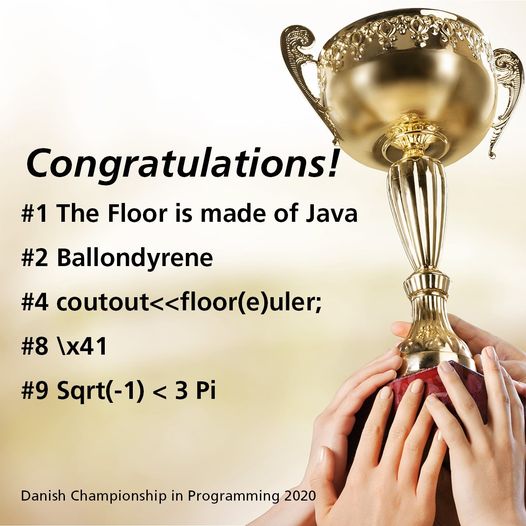