Danish high school student, Markus Krabbe, won bronze at the Baltic computer science competition, BOI 2015. Now he and his teammates are going on to the international computer science Olympiad in Kazakhstan.

The regional computer science competition for high school students, the Baltic Olympiad in Informatics 2015 (BOI), for the countries around the Baltic Sea in North-Eastern Europe, was held in Warsaw, Poland from April 28th – May 3th – and its comclusion was one that Denmark can be proud of: The Danish BOI participant, Markus Krabbe, who is a junior in HTX Sukkertoppen, did so well that he has come back to Denmark wearing a bronze medal around neck! 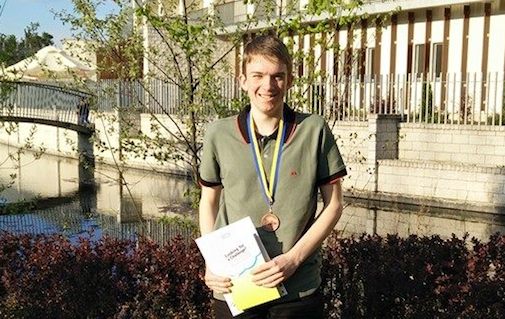 Markus Krabbe shows off his medal

Mathias Bæk Tejs Knudsen, who is a Ph.D. student at the Department of Computer Science at the University of Copenhagen as well as one of the mentors for the Danish BOI team, says:

- It has been a very good competition where all the participants did really well. Usually, some of them fall through on at least one of the days of the competition. This year, however, everybody did really well, and they can all be proud of their impressive performances. And off course we are very happy for Markus who got in on a 26th place and won a bronze medal.

4 participants are ready for the computer science Olympiad in Kazakhstan

The 4 best performing Danish participants at the BOI has been selected to participate in the IOI (International Olympiad in Informatics) from July 26th – August 2ed. The 4 finalists are Carl Dybdahl, Oscar Peulicke, Markus Krabbe, and Sebastian Blunt.

DIKU was co-organizer of Danish Computer Science Competition 2015 (Dansk Datalogi Dyst), a competition for high school students which is the basis for selecting participants for the regional Baltic Olymbiad in Informatics (BOI) for all the countries around the Baltic Sea.