Camilla is finishing her BA degree in Computer Science at the University of Copenhagen. Contrary to many other students in the Computer Science major, Camilla is mostly interested in the “soft” disciplines of Computer Science. In this article, Camilla talks about life as a Computer Science student including the significance of a good study environment, the experience of failing classes, and the importance of following your heart. 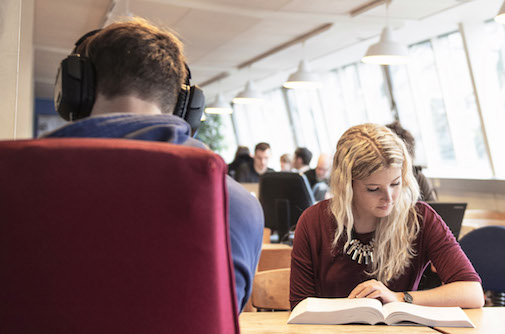 A passion for the surface

Camilla Vestberg Kiel is 23 years old and is in her 3rd year of the Computer Science undergraduate major at the University of Copenhagen. According to herself, she is not at typical Computer Science student:

"I’m a very visual girl", explains Camilla who has a greater passion for web development, usability design, and project management than for the heavy classical Computer Science disciplines like algorithms, programming languages and compilers. "I’m kind of a humanistic computer scientist", philosophizes Camilla, who musters a great amount of enthusiasm when doing usability tests for web design. "I find the psychological aspect really fascinating".

Nonetheless, Camilla acknowledges that it has been immensely rewarding to gain knowledge of the heavy methods and techniques (back end) that lie behind the presentation layer of a program (front end). “Many of the compulsory courses, I haven’t been able to appreciate before emerging on the other side of the finals. Then it suddenly became clear how important that new knowledge was (for instance bit representations, operating systems, and algorithms). A project manager also needs to know what a project requires in order to reach completion”, she reasons, “but I wouldn’t want to become a software developer myself”.

… and the heavy technology behind it

Camilla’s enthusiasm for Computer Science was initially born from a combination of front end and back end interests: A strong fondness for the newest gadgets and smart phones and an ever present curiosity prompting her to go behind and uncover the technology behind the shining surface.

For this exact reason, DIKU (the Department of Computer Science at the University of Copenhagen) proved a good match - on the one hand the education in Computer Science at UCPH goes into great detail with classical computational disciplines, and on the other hand the department has great expertise within the somewhat humanist discipline concerned with how humans interact with computers. “I have always wanted to know why things are as they are”, Camilla explains. “It’s always interesting to dive beneath the surface”.

On getting settled in a nerdy major 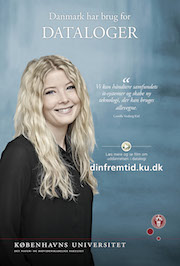 Currently, Camilla is DIKU's poster girl in the big recruitment campaign of the Faculty of SCIENCE.

Camilla didn’t have a lot of expectations about what studying Computer Science would entail before she was enrolled. “I was a real noob when I began my studies. I didn’t even know what an algorithm or a terminal was. In that way, I wasn’t a typical Computer Scientist student who enters the education with a lot of pre-experience. But I soon realized that you don’t need to know a whole lot before you start”.

Camilla has done really well in her studies. All the hard courses that many students fail, Camilla passed with high marks. Currently, she is half a year behind the prescribed period of study - partly because of one failed course, partly because she wants to take her time on her bachelor’s project about failed public IT projects.

It is okay to fail

A big part of the reason why Camilla has done so well in her studies is the inclusive study environment that makes it possible for students to meet and help each other on an everyday basis.

“It is hard to realize that there is something that you are not good at, but you have to make that realization because many of the courses are so difficult and so very different from each other.”

“At DIKU there is room for everybody - it’s a super social study. I’m so happy that I invested some time to get to know people and get involved in some of the social associations. I have had a lot of help from my fellow students - they have often been really helpful to me by explaining things I found difficult. It’s just so important to have somebody to lean against - who can lean back against you.”