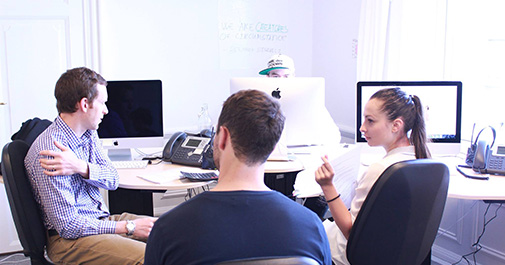 The business concept of Clerk.io is largely based on classical computer science disciplines.

- Clerk.io emerged from my student job at Unisport.dk and from what I have learned about algorithms and machine learning at DIKU, says Hans-Kristian Bjerregaard.

- In 2007 I heard about "recommendation engines" for the first time when Unisport bought an expensive and sophisticated system. I was fascinated to learn how it was possible to predict how people would act in the future, but also frustrated because the system was not very good and too difficult. So after I had resigned from Unisport in 2010 to become an instructor at DIKU, I worked on the idea from what I had learned about machine learning algorithms.

In the late evening hours in January 2011, the coding of the first prototype was done, and in the summer of 2011 Unisport implemented this first prototype which beat the existing system by an additional turnover of 143%.

- I had not really thought of it as anything but a challenging computer science project, but when Unisport asked for the price I saw the possibility of a business, says Hans-Kristian, who subsequently was in doubt, whether he should go for a Ph.D. or whether he should choose a career within entrepreneurship.

In the spring of 2012 Hans-Kristian installed the prototype with a few other companies with great success. He then decided to follow the entrepreneurial path, and in May 2012 Clerk.io was commercially launched.

Clerk.io has experienced a terrific market introduction and rumor has it that the success will continue.

In the first half of 2015 Clerk.io went from six employees to 28. The company  is now has affiliations  in England, The Netherlands, Italy and France. The total profit from last year is already reached (August 2015) and Hans-Kristian hopes that Clerk.io will reach 100 employees by the end of 2016.

Clerk.io has already generated an additional turnover of more than $160,158,100 for its customers including large Danish chain stores such as Matas, Sportmaster, Change, BON'A Parte, Lomax, Unisport and 500 other ecommerce stores.

- We expect to expand Clerk.io to overseas markets next year, but which specific market has not yet been determined, concludes Hans-Kristian Bjerregaard.