Postdoc. at the Department of Computer Science at University of Copenhagen Rasmus Fonseca has received a grant for a 4-year protein simulation project in collaboration with researchers from the Bio-X Institute at Stanford University, USA.

40 percent of all medicinal drugs existing today target the GPCR protein. Simulating this protein can help us find out how it moves, thereby gaining knowledge about how it actually functions. This is important in the fight against many different diseases, because this knowledge can make the development of new drugs more focused instead of simply relying on trial-and-error as is largely the case today. 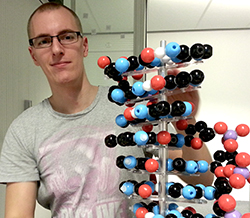 Basic research with an impact

-   My project is about simulating large proteins using techniques from robotics, explains Rasmus Fonseca. We have already tried out the method on RNA molecules, so we know it works on the small and medium scale. This time, however, we want to use the method for something that’s really going to make an impact.More specifically, Rasmus and his colleagues are interested in the GPCR protein, which is involved in many processes in the body by sending signals through the cell membrane.

The contact to the Stanford research community was established when Rasmus was held a post doctoral position at Stanford in 2014.

- I'm really excited to get back, says Rasmus. - This time, I’m looking forward to collaborating with Brian Kobilka (the 2012 Nobel Prize laureate in Chemistry red.) and the people in his lab.

For Rasmus, the main driver is not so much the impressive stock of Nobel Prize laureates in various fields or the fact that Stanford uniformly ranks in the top of the world’s university ranking lists.

To a researcher in the intersection of biology and computer science, Stanford is especially attractive because of its strong interdisciplinary tradition. Bio-X present themselves as “Stanford's pioneering interdisciplinary biosciences institute”. Rasmus wants to bring back some of that interdisciplinary spirit to the University of Copenhagen, where he intends to work towards a closer collaboration between the Departments of Biology and Computer Science.

-   I’m looking forward to digging into some of the computational problems that biologists don’t know they have, Rasmus explains.

The Novo Nordisk grant is called “Visiting Scholar Fellowships at Stanford BIO-X”, and this year it was awarded to two applicants. From December 1st 2015, Rasmus will spend 3 years at Stanford University followed by 1 year at University of Copenhagen.