On 3rd August DIKU's hacker team Pwnies will leave for Las Vegas to participate in the 23. DEF CON conference and the unofficial WM in CTF-hacking.

The annual international DEF CON hacker conference in Las Vegas is just ahead. From 6th to 9th August 2015 the 23rd conference and the unofficial world championship in CTF Hacking is held. Only 15 teams from the entire world have qualified for the contest.

DIKU based Pwnies - or Gallopsled, which is the official name of the 14 person team during the contest, pulled through all necessary qualification contests and now look forward to challenge the world elite in the hacking discipline called Capture the Flag.

It's not enough to be a good hacker. The tactic preparations for the contest matter just as much. The team has prepared through clearing expectations and ground rules internally. And this year a formal team leader has been appointed, Kasper Haabb, who will serve as liaison officer between the Gallopsled team and the DEF CON officials. 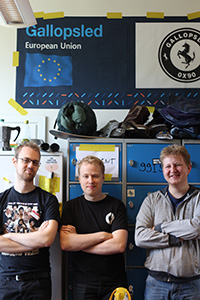 Moreover, they have held a small rehearsal, where all programmes and applications were tested to ensure that all hardware and software is toptuned when arriving in Las Vegas.

The CTF contest is tough and a good place on the scoreboard is prestigious. Last year Gallopsled only reached a lower score on the board - according to themselves it would be nice indeed to beat some of the well-known toprunners which they have met at other qualification rounds. At least, Gallopsled hope to end up in the higher end of the scoreboard.

DEF CON is more than a hacking contest

It's a conference where you can go to talks and workshops and exchange experience with like-minded people.

- We also want to have some fun, Mathias Svensson and Kristoffer Søholm agree. It's their 5th DEF CON round in Las Vegas.

When DEF CON is over on 9th August, 5 Pwnies will continue their tour to the Carnegie Mellon University (CMU) and visit the American team (Plaid Parliament of Pwning), also participating at DEF CON.

- We want to experience the USA, get to know what they are doing at CMU and do some cosy networking, Mathias and Kristoffer conclude.

At the Department (DIKU) everybody is very proud of our talented hackers and we wish them good luck and all the best for the contest.