According to the newly published university ranking list, QS World University Ranking by Subject 2015, the University of Copenhagen ranks among the 150 best universities in the world under the category 'Computer Science'.

The University of Copenhagen generally comes in nicely on the QS ranking of the best universities in the world. In 2015 University of Copanhagen ranks as number 45 while the second best Danish University, Aarhus, is number 96.

QS also compares universities according to subjects. In the QS World University Rankings by Subject 2015 under the category "Computer Science & Information Systems", the Computer Science education at University of Copenhagen ranks among the 101-150 best in the world. 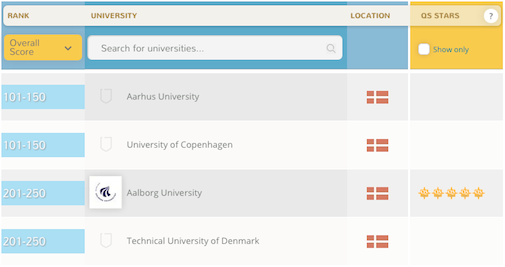 Ranking by subject is a good basis for choosing a university

According to QS, ranking universities by subject is a useful tool for prospective students who are considering what university to choose:

“Everyone talks about rankings, but QS started all this to help international students make smarter choices, and students tend to pick their subject before their university. Improving and extending these rankings by subject is central to our mission – expect to see more subjects and more universities evaluated in years to come”, says Ben Sowter, who is responsible for the rankings, on the QS web side.

The ranking of universities by subject is based on 3 criteria:

1) Academic reputation, that is, academics are asked to evaluate the quality of the research being done in specific fields at other universities,
2) employer reputation, that is, employers are asked to evaluate how employable graduates from different fields of study af different universities are,
3) research citations per paper.