Voltset: A startup based on good ideas and computer science

Did you know that it is possible to find hidden electrical cables in your wall using your smartphone? The starup company Voltset has developed a 'multimeter' tool which makes it safe and easy to access electrical installations without actually touching. Computer science student at DIKU, Panos Karampis, has helped turning the idea into reality. 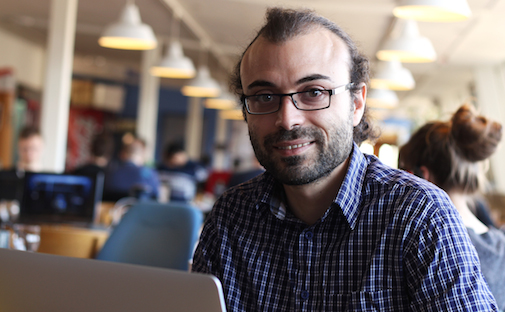 At the moment, Panos Karampis is finishing up his Master’s degree in Computer Science at the University of Copenhagen (DIKU). But alongside writing his thesis, he also finds time to work as a software developer for Voltset.

Panos got involved in Voltset though the course Development Studio at the Department of Computer Science (DIKU). Here students are taught everything about the process of developing software products from idea to finished product. The course was organized in collaborations with the Copenhagen School of Entrepreneurship, an incubator centre at the Copenhagen Business School (CBS). In this way, student entrepreneurs from CBS have had the change to engage talented software developers from DIKU – this is how the two CBS students Tom Wang and Michael Bruun-Larsen managed to commit Panos as a partner in Voltset.

But what is a multimeter?
A multimeter is a device, which can measure electrical properties such as voltage, ampere and resistance. A Voltset multimeter differs from other products on the marked by being both small and well designed as well as far cheaper than other available products. 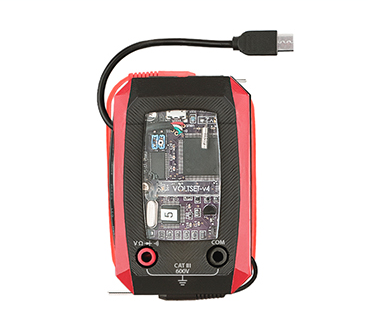 "People won’t need to carry a big and uncomfortable tool with them anymore, just their smartphone and a small (de)attachable external device to the smartphone", Panos explains about the functionality of the multimeter.

"The Voltset software is capable of pushing results into Google spreadsheets live, which would minimise the risk for people when working with high voltage, they would just have to position the smartphone and access the spreadsheet from a laptop remotely and safely".

There are still challenges to address for the student entrepreneurs
Panos initially got involved in Voltset because the project presented some interesting computational challenges.

"Back then, I was looking for getting experience with Android development and this project combined many technologies at the same time - android development, web applications, software/hardware integration - which were really intriguing to me."

But now it becomes increasingly more difficult to find the time to work on the multimeter.

"My thesis is very time consuming and combined with a full time job as a software developer, it leaves me not much time for Voltset. For Voltset I am dedicating weekends, developing new functionality and updating current ones."

Voltset has already had a very successful kickstarter campaign where they raised twice the amount of money for financing their product as they had hoped for. There are, however, still challenges to solve before Voltset can call themselves a well established business.

"We are still struggling to build an operational device that complies with safety standards and at the same time satisfies our needs", Panos mentions as one of the most pressing challenges.

Nonetheless, he is very optimistic about the future of the company:

"We are now working with a world class company specialised in multimeters to develop the hardware. That will bring us one step closer to our goal", he concludes.

Read more about Voltset at their homepage