For the sixth time in seven years DIKU based student programmers known as Lambdabamserne secured the first place in The 2016 Nordic Collegiate Programming Contest.

With as much tension as last year - but demonstrating a more convincing lead already halfway through the competition, Lambdabamserne - a team of two Math and one Computer Science student from University of Copenhagen - regained the coveted trophy and honour as Denmark's no. 1 student programmers in 2016. 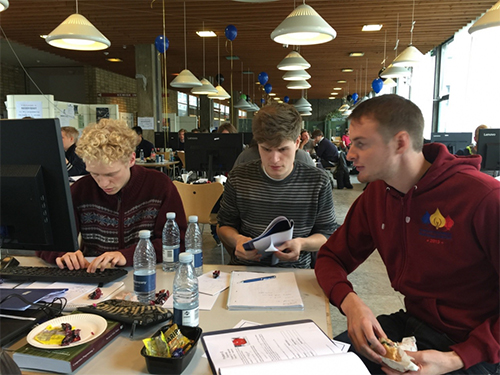 Nicolai Nebel Jørgensen, Jakob Tejs Knudsen and Nikolaj Simling are the current computational brains behind the Lambdabamserne and have constituted the winning team for two years (as former Lambdabamser team members have gradually split out due to old age and graduation).

Apart from a nice cheque of DKK 10,000 (equalling Euro 1,425) the winning team has also won a seat in the Northwestern European Championship taking place in Bath, England, on 18-20 November 2016.

Final standings in the Scandinavian competition.