Michael Seifert is the co-founder and CEO of the Danish software developing company Sitecore. He will tell you about his exciting journey, from the early business plan discussions in a small kitchen to being the first unicorn business in Denmark, with EQT’s investments of EUR 1 billion. 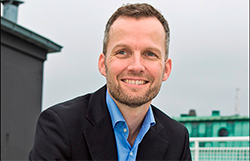 In 1996 Michael completed his Master’s Degree in Computer Science at University of Copenhagen, but his interest for IT and computers started already as a child. When Michael was only 11, he started coding, and a few years later at the age of 15, he started his first IT company.

During his studies he was one of the principal developers of a multiplayer computer game called DikuMUD, a game serving millions of users and a predecessor to today’s massive role-playing video games such as “World of Warcraft”.

After Michael completed his Master’s Degree in Computer Science he went on to pursue advanced technical work with several Silicon Valley entrepreneurial companies in the U.S. And later on he became President of a successful multimillion dollar custom software development company for three years.

In 2001 Michael established Sitecore.com along with four fellow internet zealots. They introduced a product with a functionality and appeal that was completely disruptive in the market - and that has evolved to be a global leader in experience management software today.