Computer Science bachelor enrolment at University of Copenhagen increases by 30%

242 applicants have been offered a seat for the bachelor's programme in computer science. This reflects an increase in numbers by 59 and almost one third compared to 2016. Female students have also increased significantly.

As the plans of increasing the capacity of the bachelor's programme in computer science offered by University of Copenhagen by almost one third - i.e. 50 more seats than the 2016 ceiling of 170 - skepticism was expressed as to whether this might affect the high quality of the education and the high level of entry negatively.

However, all skepticism was shown to be groundless, when the new admission figures were published. By 28 July a total of 242 students, of which 30 women, had been admitted a seat - having qualified for the admission requirements and minimum grades required. By 30 August, 228 new freshman have accepted a seat, including 30 women!

Series: No. of persons admitted to the CS programme since 2012 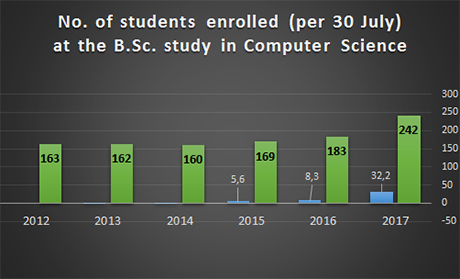 Green figures express the no. of seats offered by year. Blue figures reflect the relative increase in per cent compared to previous year. Source: The Danish Ministry of Education.

Head of CS Bachelor Studies at DIKU Torben Mogensen is happy with the record breaking application numbers for the CS study at University of Copenhagen: "We are especially pleased to see the increased interest amongst female applicants. 30 women have been offered a seat, this reflects approx. 13 per cent of all applicants and a significant increase compared to last year's historical low of 7.7 per cent. Altogether the interest for studying computer science at this university has risen markedly. 200 out of the 242 newly admitted students had CS at University of Copenhagen as their first priority. Moreover, Computer Science at UCPH now has most students compared to other SCIENCE programmes.

Minimum grade point average was introduced in 2012 - do we see any impact from the significant increase in students?

Until 2011  the student intake for computer science was free, provided that the applicants had qualified by passing their youth education (Math: A and English: B). As from 2012 the concept of minimum grade average was introduced to secure better student progress and completion.

Vice Head of Department at DIKU for Research Jon Sporring explains: "The minimum grade for access to computer science has increased steadily over the years -  from a modest 5.1 in 2012 to an acceptable 7.0 in 2017. This is, admittedly, slightly lower than in 2017 (with 7.4), but is a natural consequence of the increased enrolment."

The  50+ extra students are expected to create good volume in the brand new specialisation in Data Science which can be selected next year when this year's freshmen approach the second year of their CS education.

"We are excited to learn, how many of our new students will choose the Data Science specialisation compared to the classical Computer Science or the path leading to a career as upper secondary school teacher. Many top researchers at DIKU engage in Data Science both as researchers and teachers. We are confident that the prospect of receiving researched based teaching already at bachelor stage will increase the interest for choosing Data Science", Jon Sporring concludes.

In addition to Computer Science, DIKU also supply teachers to the interdisciplinary bachelor programmes: Communication and IT study at Humanities, Health Informatics (It og Sundhed) at the Faculty of Health as well as Information Science and Cultural Dissemination at Humanities.

While Communication and IT accounted for full house (70) and a minimum admission grade of 8.6 after first application round by 28 July, the two other programmes still had vacant seats over the summer. These are, however, probably now filled up (updated figures are not available).

More statistics (In Danish) at: Studier.ku.dk