New centre of excellence in algorithms research in Copenhagen

The VILLUM Investigator and recipient of the large amount of money is professor in algorithms at the Department of Computer Science, University of Copenhagen (DIKU), Mikkel Thorup explains:

- To be a VILLUM Investigator has a huge impact. We need collaboration and mutual inspiration. With the grant I will have the possibility to gather the strongest algorithms researchers present in the Copenhagen area. We shall establish critical mass and an environment that will attract the very best international talents. Copenhagen will become a European algorithms hub - a magnet for talent development in algorithms.

The money from the grant will be spent on establishing the research centre BARC in collaboration with the algorithm professors Stephen Alstrup (DIKU), Rasmus Pagh (ITU) and Thore Husfeldt (ITU). The four professors represent leadership experience from university and industry, and have comprehensive strengths in the area of algorithms. The centre will be situated at University of Copenhagen and operational as of 1 September 2017. 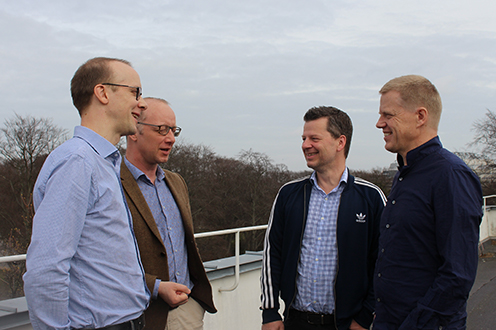 From the left: Rasmus Pagh, Thore Husfeldt, both IT University, Stephen Alstrup and Mikkel Thorup, both University of Copenhagen

Algorithmic is all about effective handling of data - and in a world where the amount of data is growing much faster than the speed of computer capacity, effective algorithms become more and more critical.

- Algorithmic research is unpredictable, because we explore surprising ideas for groundbreaking breakthroughs. However, I'm certain, that the results will be fantastic, says Mikkel Thorup.

He is one of the leading experts in the world in the area of algoritmics and data structures. In 2015, he received the most significant individual research grant in Denmark, the Villum Kann Rasmussen Annual Award in Science and Technology of DKK 5m as an acknowledgement of his many international research breakthroughs.

- My research focus concerns fundamental algorithmic problems of broad applicability. Thus, many of my findings have led to great industrial applications that in total have more than one billion users, says Mikkel Thorup.

Companies such as Google, Microsoft and Akamai have founders with a background in algorithmics. Also, Stephen Alstrup, professor at DIKU and one of the researchers in BARC, founded the streaming company Octoshape which (sold in 2015) with more than 100 million users.

VILLUM Investigators is a new programme established by the VILLUM Foundation. It's characterized by grants for scientists rather than for specific research projects. The purpose is to give talented researchers from both Denmark and abroad at a Danish research institution the possibility to concentrate on the research they are dedicated to.

101 researchers applied and in total, DKK 400m were granted to 11 researchers. Three of the 11 grants were awarded to researchers at the Faculty of Science at University of Copenhagen. In addition to Mikkel Thorup, Dorthe Dahl-Jensen and Jens Hjorth, both from Niels Bohr Institute, received large grants.

- Each of the 11 researchers have demonstrated innovative and pioneering research of the highest international quality, and each of them have the leadership skills and the potential to build and maintain an international research environment. This will be a significant contribution to the technical and natural sciences - and ultimately society, says VILLUM FONDEN's Director of Science Professor Thomas Sinkjær.

The 11 VILLUM Investigators will be celebrated at an event on 27 April 2017 with participation of i.a. the Minister for Higher Education and Science Søren Pind. The event will take place at VILLUM Windows Collection in Søborg.

The four professors in BARC 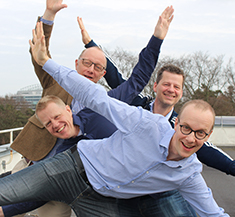 Mikkel Thorup, Department of Computer Science, University of Copenhagen. Fellow of the ACM, Fellow Honor of AT&T and member of the Royal Danish Academy of Sciences and Letters. Received the VILLUM Kann Rasmussen Annual Award in 2015. Expert in fundamental algorithms and data structures.

Stephen Alstrup, Department of Computer Science, University of Copenhagen. Founder of the company Octoshape. Manager of the algorithmic research in the biggest Danish Big Data project, DABAI. His algorithms research was chosen to be among the 15 best algorithm results from all over the world in 2016. Expert in Big Data and innovation.