With a Sapere Aude Starting Grant of nearly 6m DKK (0.9m USD) from The Independent Research Fund Denmark DIKU's Christian Wulff-Nilsen will during the next four years perform research in algorithms and data structures for dynamic and static graphs. 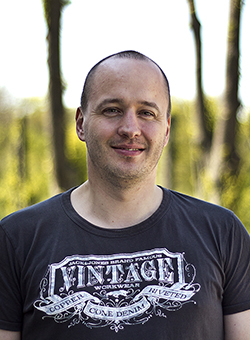 Christian Wulff-Nielsen, who is a computer science graduate from University of Copenhagen and since 2006 has performed research in primarily graph algorithms and data structures,  has now received the distinguished Sapere Aude Starting Grant from The Independent Research Fund Denmark.

The grant makes it possible for Christian to build up a specialist team comprising himself as well as a postdoc and a PhD Student who will over the next four years develop more efficient algorithms and datastructures for the shortest path problem and minimum spanning trees.

The research project will focus on both static and dynamic graphs, i.e. graphs that change over time.

An example of the practical use of Christian's research in dynamic graph theory is a GPS system, where you need to find the shortest paths or route while driving. Road networks are far from static - e.g. road works or major traffic jams may block the optimal route - and the use of algorithms and data structures for dynamic graphs help the GPS quickly search for alternative routes.

The ambition of this research project is to obtain a better and more profound understanding of the running time and memory required to solve such problems.

Christian looks forward to starting up the project first thing in the new year:

- Our society faces steadily growing amounts of data that need to be managed - but our hardward fails to keep up with this development. It is crucial, however, that we can handle this data. The solution is to develop smarter software requiring less run-time and RAM. Here, my research plays an important role, since I investigate the limits as to how efficiently we can solve graph problems. The Sapere Aude grant provides me with the necessary room and time to dive into these problems addressed by the project. And the fact that we are now a team consisting of a PhD Student, a postdoc and myself is decisive to obtain my targets.

At the Department of Computer Science, locally referred to as DIKU, Christian's interest in and talent for research in the field is well-known. He has already obtained several awards and recognitions - as an example he received together with co-author Shiri Chechik a Best Paper Award for the article Near-Optimal Light Spanners submitted at SODA 2016, the most important algorithmic conference. Christian Wulff-Nilsen has, moreover, published several articles at the top conferences STOC, FOCS and SODA.