Once again the Danish (and Nordic) Championship in programming - Nordic Collegiate Programming Contest 2017 - showed heavy UCPH superiority on the scoreboard. Lambdabamserne won the first prize for the 7th time - really outstanding! Other DIKU teams were convincing as well.

36 teams had signed up for the Copenhagen contest at UCPH, hosted by Department of Computer Science and facilitated by the firms Netcompany and Jobindex.

Simultaneus contests took place in Aarhus and Aalborg as well as in the other four Nordic countries on 7 October when the Nordic (and national) champions in programming were to be found. 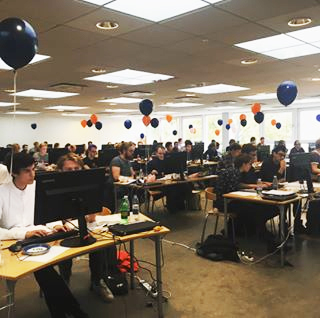 Each balloon represents a solved task

11 different challenges were posed, which could be picked in random order according to probability of a quick solution, favourite type of task or expected difficulty.

Balloons are credited for each task solved. Credits are also given for shortest time and first team to solve a task.

At the common scoreboard for Copenhagen the progress of the various teams could be followed minute by minute.

The team Lambdabamserne from UCPH has won the contest six times before and were, of course, the great favourites also this year. Any possible tension quickly faded away, as Lambdabamserne aka. Jakob Bæk Tejs Knudsen, Peter Rasmussen and Nikolaj Simling, placed themselves in a comfortable no. one position already halfway through the contest. With 9 tasks solved out of 11 possible, they appeared much more superior this year than in 2016 (7 of 11). 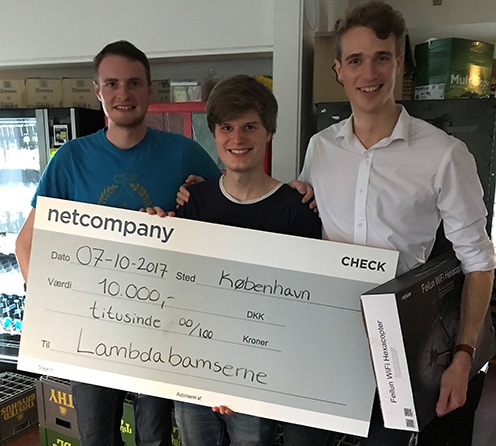 The winning team received a gift cheque for DKK 10,000, which can subsidize their participation in the NWERC (North-Western-European Programming Contest) in Bath on 25.-26. november 2017.

Other UCPH/DIKU teams did a good job as well

With 6 solved tasks the second-best UCPH team Participants, aka. Gabriel Damsholt,
Carl Andreas Dybdahl and Jonas Klausen became third just after the Aarhus-classic Beyond Ballmer’s Peak ∪ Frank. Participants will join the NWERC as well. Altogether, the 2017 programming contest was a major UCPH triumph, involving approx. 20  teams from this university and 17 from DTU and ITU, respectively.