Creativity and Innovation - in a UCPH MakerSpace

Several American universities have one. Roskilde University have one. Roskilde Festival has one. University of Copenhagen doesn’t have one. A MakerSpace. A home for creativity and innovation. A stepping stone for new innovative ideas. A platform for students and researchers to play and interact with technology through new types of digital fabrication.

From 26-30 September 2016, 52 students from the UCPH master study programmes in Communication & IT and Computer Science participated in a unique research-based teaching activity, a MakerWeek, directed at exploring new potential ways to think about prototyping and innovation. The MakerWeek took place in a for-the-purpose-established MakerSpace at KUB Nord, where borrowed 3D printers, Arduino boards, and conductor materials were transported in for the purpose of students getting to know new technological opportunities and reflect upon innovation processes.

- The purpose of the MakerWeek was two-folded. Firstly, we wanted to demonstrate the interdisciplinary possibilities for teaching across UCPH study programmes, and secondly, we wanted to challenge the boundaries between the digital and the physical and thus transform the way we think about IT systems and design, says professor Pernille Bjørn, who’s behind the initiative and a big advocate for a UCPH MakerSpace that could be beneficial across the whole university, faculties and programmes.

According to Pernille Bjørn, a joint UCPH MakerSpace will potentially open up for interdisciplinary teaching and research and become a space where people can come together and explore the potential of digital fabrication:

- Digital fabrication provides endless possibilities, however whether we succeed to leverage these new opportunities depends upon our abilities in bring creativity and technological knowledge together together with specific usage situations. It is only through studies of use and technologies that we can create new innovative ideas, says Pernille Bjørn.

For instance, if we are to create innovative technology supporting e.g. archaeological excavation, new medical research, or a new healthcare IT system, we must look beyond the ordinary keyboard, mouse, and screen as input/output. Because of digital fabrication we are now able to include physical and tactile interaction elements earlier one, while prototyping our concepts. For example, why should archaeologists look at a screen when they study the ancient artefacts rather than 3D print the artefact and experience it physically?

- The possibilities are endless, and we – at DIKU – are interested in doing research on how we can utilise digital fabrication in designing IT systems for cooperation. We work to develop new methods and techniques which make it possible to merge digital and analogue materials by combining the digital and the physical when we design new digital cooperative technologies – and this MakerWeek was the first step in that direction, says Pernille Bjørn.

The nature of Computer Science has changed since its first inception where pencils and papers where the main tools. Today, programmable material, large interactive screens, and other physical setups are required for top-tiered computer science research. We are at a stage were electronic workshops are necessary, in the same way as the medical sciences needs a laboratory:

- The purpose of a joint UCPH MakerSpace is however more than just a computer science laboratory. The interdisciplinary nature of a UCPH Makerspace is to accommodate a diverse set of usage across UCPH, says Pernille Bjørn and continues:

- Several academic areas at UCPH across science, humanities, library science, and health sciences will benefit from a MakerSpace. Digital fabrication is already entering Danish libraries, students from the Faculty of Health and Medical Sciences are the most diligent user of the 3D-printers at KUB Nord, and we have been contacted by people from the UCPH study programmes in the area of archaeology who are interested as well. The next step is to organise a seminar across UCPH for all interested partners, where we together will create a joint vision which we can present to the UCPH management. We hope and believe that a UCPH Makerspace will become a reality for the benefit of us all.

Organising a MakerWeek - without a MakerSpace

Despite the lack of an established Makerspace at UCPH, a team of dedicated researchers at DIKU managed to organize the MakerWeek to everybody’s satisfaction – however it took much effort to make it a reality:

- In collaboration with colleagues, I used several months to find a physical location, procure the right equipment, and arrange transportation of the equipment etc. If we'd had a MakerSpace at UCPH, we could have focused our time on planning the academic content of the teaching, says Pernille Bjørn.

The team borrowed the rooms and 3D-printers at KUB Nord. Furthermore, they ordered new equipment, e.g. Arduino boards, and they borrowed 3D-printers from the IntermediaLab at the IT University.

- This MakerWeek definitely wouldn’t have been a reality if it hadn’t been for the major dedication to the project and our good relation with people who help us. We are happy that it became a reality – and it’s clear that the students were very happy about the event, concludes Pernille Bjørn. 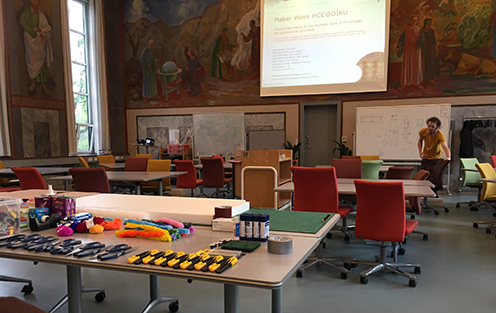 Setting up the MakerSpace 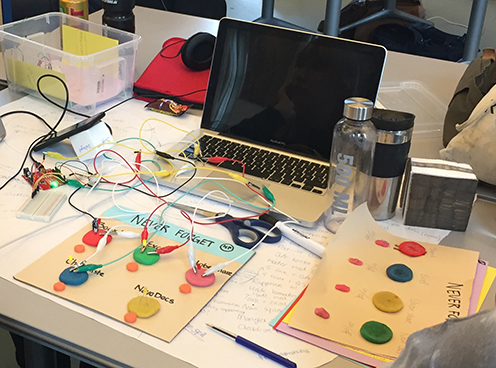 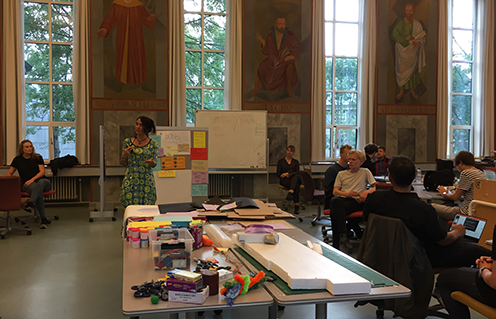 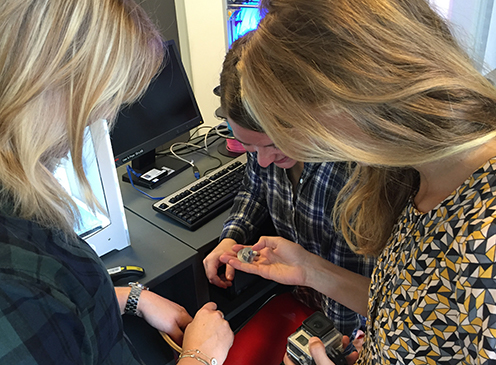 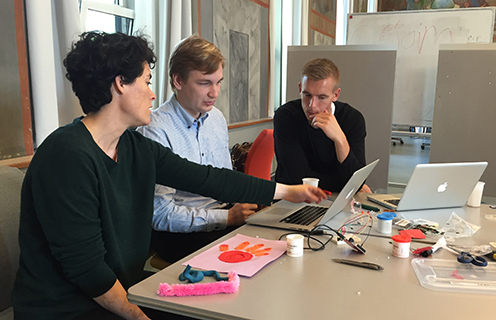 The whole week, researchers from DIKU were present to guide the students 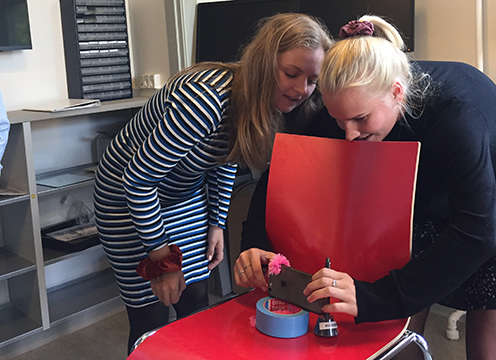 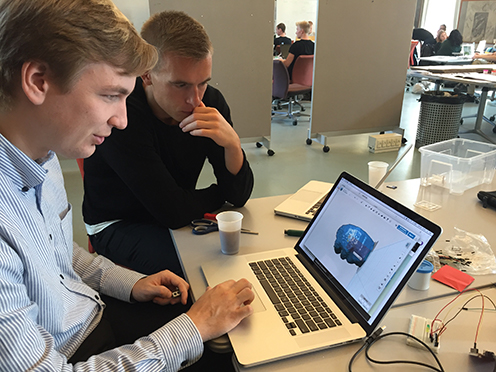 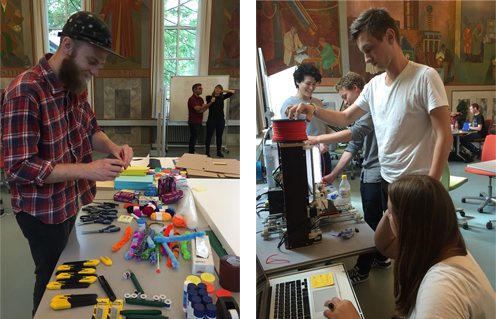 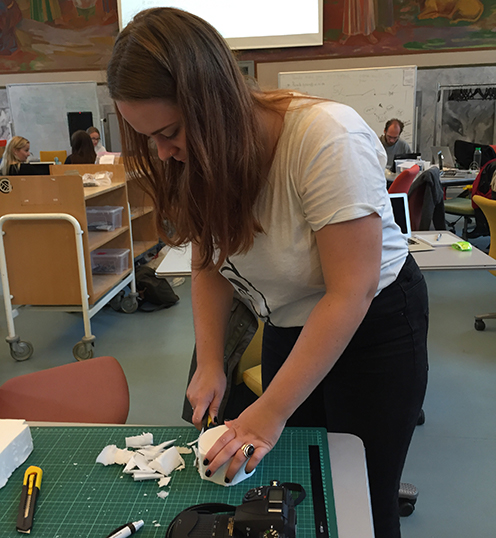 Professor Pernille Bjørn and Kasper Hornbæk from DIKU/CCC invites researchers and students at UCPH to a start-up meeting on 13 March 2017 concerning a joint, interdisciplinary UCPH MakerSpace.

Do you want to become a part of the UCPH MakerSpace initiative from the beginning?

The students were divided into 15 groups, who collaborated on a project during the entire week. Each project was grounded within the immediate problem situation of different companies, who serve as the clients for the students. During the week, the students documented their innovation process on video, where students made a pitch of their idea to their client. The Makerweek ended Friday afternoon with a joint showing of each group’s individual video.

During the MakerWeek, the students experimented with 3D-printers and Arduino boards to create and prototype a concept for their clients. They explored the multiple roles of prototypes as both solutions to problems, exploratory devices, minimal viable products and communication of concepts. In addition, they were introduced to the commercial part of the innovation process and they learned how to pitch their ideas.

After the Makerweek, each group got a box with different digital components which they borrowed for the rest of the semester while collaborating on their projects.