DIKU's PhD student Mikkel Abrahamsen is the first researcher in Denmark, who gets four papers accepted the same year at Symposium on Computational Geometry (SoCG). And he is the researcher with the highest number of papers accepted this year. SoCG is the top conference in algorithmic geometry and will take place in Brisbane, Australia on 4-7 July this year.

Mikkel Abrahamsen has a bachelor degree in Mathematics and a master degree in Computer Science from DIKU. Today, he is a PhD student in DIKUs Algorithm and Programming Languages section. His four accepted papers at SoCG are all dealing with different kinds of algorithmic geometry problems. 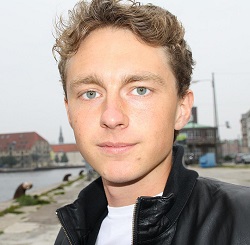 The solution to a 40 year old mathematical problem

One of the papers is about “the lion and man problem” and is written in collaboration with Jacob Holm, Eva Rotenberg and Christian Wulff-Nilsen. In the article they solve a 40 year old mathematical problem by proving that two lions not always are enough to catch a man in a bounded area with rectifiable lakes.

The other paper is written together with Anna Adamaszek and Tillmann Miltzow, and they study the art gallery problem, which is one of the fundamental problems in computational geometry.

The last two papers are written with four researchers from Eindhoven University of Technology, where Mikkel studied a year ago during his exchange. Those articles are about different kinds of clustering problem for points in a set. 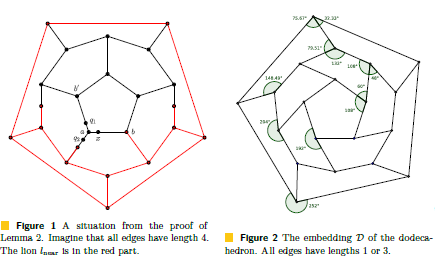 We answer the following question dating back to J.E. Littlewood (1885–1977): Can two lions catch a man in a bounded area with rectifiable lakes? The lions and the man are all assumed to be points moving with at most unit speed. That the lakes are rectifiable means that their boundaries are finitely long. This requirement is to avoid pathological examples where the man survives forever because any path to the lions is infinitely long. We show that the answer to the question is not always “yes” by giving an example of a region R in the plane where the man has a strategy to survive forever. R is a polygonal region with holes and the exterior and interior boundaries are pairwise disjoint, simple polygons. Our construction is the first truly two-dimensional example where the man can survive.

Next, we consider the following game played on the entire plane instead of a bounded area: There is any finite number of unit speed lions and one fast man who can run with speed 1 + e for some value e > 0. Can the man always survive? We answer the question in the affirmative for any constant e > 0.

Minimum Perimeter-Sum Partitions in the Plane 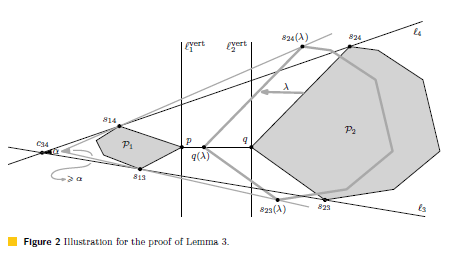 Let P be a set of n points in the plane. We consider the problem of partitioning P into two subsets P1 and P2 such that the sum of the perimeters of ch(P1) and ch(P2) is minimized, where ch(Pi) denotes the convex hull of Pi. The problem was first studied by Mitchell and Wynters in 1991 who gave an O(n2) time algorithm. Despite considerable progress on related problems, no subquadratic time algorithm for this problem was found so far. We present an algorithm solving the problem in O(n log4 n) time and a (1 + e)-approximation algorithm for the same problem running in O(n + 1/e2 · log4(1/e)) time.