What’s next within robotics and AI? How about soft robots for household purposes?

A new research project for development of AI based simulators for controlling ‘soft robots’ has been initiated at Dept. of Computer Science at University of Copenhagen. Soft robots are mostly used in the bio-medical industry; it is anticipated that soft robots will gain importance in many other areas in the coming years. 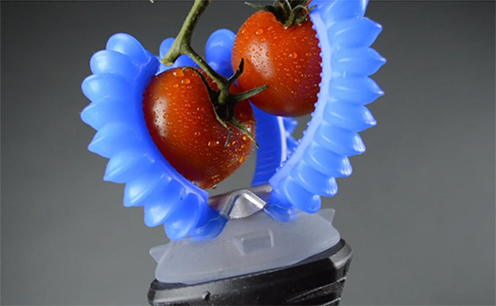 Image of a soft manipulator to simulate from. Photo: Soft Robotics Inc

A new exciting research project for development of AI based simulators for controlling ‘soft robots’ is underway. The firm NVIDIA has joined forces with Department of Computer Science at University of Copenhagen and hired Miles Macklin as PhD fellow under the supervision of Kenny Erleben to create fast high-fidelity simulators for training artificial intelligence (AI) to control the motion of soft robots.

A soft robot is a small, lightweight machine, made from materials that are soft and elastic. Soft robots are mostly used in the medical or bio-medical industry or simply as play toy, but it is anticipated that soft robots will gain importance in many other areas, e.g. as little helpers in the households or in health care.

Currently, the soft robotics domain asks for both accuracy and speed in simulators. This is challenging from a research perspective, as the inability to trade one trait for another requires a new mind-set for simulator design. For example, it is not acceptable to have objects penetrating or flying through each other as often observed in computer games. Fortunately, recent developments in position-based dynamics (PBD) combined with sparse blocked matrix libraries running on GPUs hold much promise for providing the soft robotics and AI community with an accurate and highly scalable simulator.

Associate Professor Kenny Erleben, who initiated and now supervises the PhD project, is convinced that data-driven and simulation-based modelling can be coupled to provide a combined solution rather than being seen as each others’ adversaries. Erleben's past work has focused on fast methods for entertainment and training, for example, the physics engines used in computer games and film. Here, perception of end-users allows one to use methods that run faster while sacrificing some accuracy.

Miles Macklin is one of the currently most active researchers in the field of position-based dynamics. At the core of the project, Miles will invent new simulation methods that can provide both fast and accurate solvers, exact mesh based contact point generation, and full coupling of rigid and deformable models in the same framework.

Soft Robotics is still in its infancy, but industry is pushing its development. NVIDIA is one of many drivers in this maturing process. The research team hypothesizes that control of soft robotics is one of the open research challenges that presently prohibits the broad deployment and usage of soft robots. According to Erleben, data collection and sensory feedback from real robots is not fast enough or dense enough in data samples to directly apply deep learning. Most probably, the ability to gain data will be inferior at least for the next coming decade or so.

Hence, the best option to overcome the lack of data for training controllers of soft robots is to provide high fidelity models of their dynamics.