14 December 2017 marked the premiere of six new computer games for tablets produced by graduates from the Danish National Academy of Digital Interactive Entertainment, DADIU. Computer science students from i.a. DIKU have contributed to both content and design. 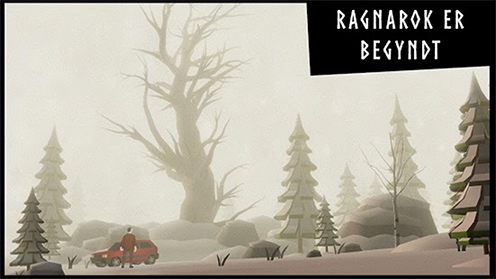 During the past semester around 100 Msc students from 13 Danish universities and art schools have worked together in six teams to create new computer games. For the 12 years, in which the DADIU Academy has existed, more than 1,000 people have graduated - many of which are today working in leading game studios all over the world.

See and test the new games on the DADIU website

All six graduation games are designed for tablets with Android operating system and can be found on the Google Play store by searching ‘DADIU’, an acronym for The Danish Academy for Interactive Entertainment. The six games are also described in detail on the DADIU website.

DIKU students participated in 4 of 6 games, below you can meet the computer scientists behind Fimbul'91 and Snowblind 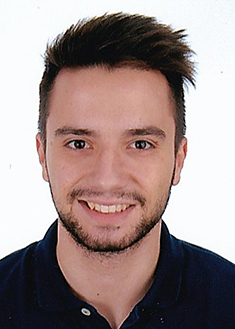 The Portuguese master student Fernando Alves was part of the team creating Fimbul'91 a game taking place in the year of 1991 in the Nordic Mythological Winter, which - according to Fernando - aims for the stars by incorporating new features never before seen in a mobile platform.

As Fernando puts it: "We knew we could have done a very simple game that would run flawlessly but we decided to go a little further and come up with a game that has not been done before in a mobile platform. Our most brilliant feature is to have a combat system like Pokemon but instead of using attacks we use conversations between persons. So instead of having our main character attack another person, we have him "befriend" someone and this way uncovering more details about our story. Also, all our conversation trees are custom

made so that we can always have a different dialogue depending on our choices throughout the game."

Fernando admits: "Before DADIU started I was terrified, I did not have any knowledge in Unity and I had no idea as to how 'international-friendly' the course would be, since all international students I knew from my master degree were not going to take this course.

Surprisingly, this was the best course I had since I arrived in Denmark, I met numerous interesting people from the gaming industry and everyone maintained an English environment around me so communication would always be fluid. I recommend vividly to anyone who wants to integrate on the Danish society and loves games to take this course. Also, you get to understand how a game is viewed in all the different aspects such as Art, Director, Designer, Sound and not only as a Programmer. My team was always very understanding and our project manager and lead programmer balanced the tasks so everyone learned and did tasks appropriate to their level (in my case since I did not know Unity in the beginning we started with more pair programming)."

Philip Falck, who will soon complete his Msc in computer science at DIKU has chosen to specialise as game developer at DADIU. As 'Lead Programmer' he has put his fingerprint on the game Snowblind, which attempts to recreate the feeling of being lost and of climbing trees. 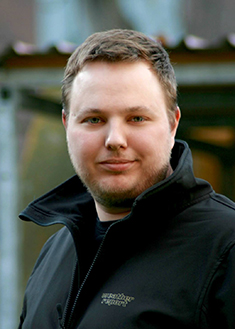 CS Student at DIKU Philip Falck. Below: Scene from Snowblind

Philip decided to choose the DADIU specialisation to get to work with simulation of a production environment, which is far from the theoretical approach that many courses at the computer science study have. According to Philip this practical simulation practice is certainly an asset. During the 6-week production period, which marks the culmination of the study program a minimum of 8-15 working days is allocated for the team work. 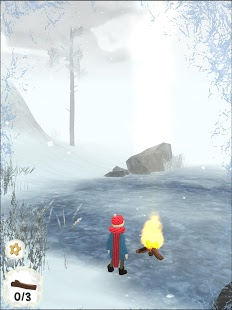 About the idea and the creative process of the game Snowblind," Philip says: "It was a long process, and you could clearly feel that the team members come from different backgrounds. On the one hand, you have a director, who comes from a creative and visionary background, and on the other hand you have us programmers with a pragmatic and very analytic background. It is rather difficult to work with concepts that are very abstract. The thing I liked the most about Snowblind was the attempt to create an open forest landscape, which you do not otherwise experience on tablets due to risk of bad performance."

According to Philip, it was an exciting but also difficult process for him as a programmer: "It was difficult, because in this kind of production work all the work is focused on the  programming, and there was too little time to perform the correct processes or iterative actions normally required. Everything had to happen simultaneously. This meant that our idea was only fully developed immediately prior to delivery.

Judging by the critics, the teams have succeeded very well indeed. The games Snowblind has obtained 5 stars and Fimbul'91 four stars on Google Play.

See the games on DADIU.dk

DADIU educates future game developers. The students participating in DADIU come from art schools and universities in all of Denmark. The programme consists of a full time semester taking place each fall - the semester runs from the last week of August until mid December.

DADIU admits around 100 students each year. The students participate in classes, workshops, and game productions. During the productions, the students are divided into six teams, resembling six real game studios.

The classes in DADIU generally take place in Aalborg and Copenhagen, and students attend the one closest to home. However, during the productions – which takes up most of the semester – they are located with their production team at a production facility in either Copenhagen or Aalborg. DADIU takes care of basic accommodation and covers transportation cost for those who need to relocate.

The last six weeks of DADIU – the so-called Graduation Game Production – is where the teams produce their final game. The games have been quite successful and have been nominated for many awards at international festivals.
In 2013 the platform was changed from browser games to tablet games.

To be eligible to send students to DADIU, the education must be a member of DADIU.
DADIU is run by a secretariat organized under the National Film School of Denmark.