Daniel Ashbrook has been appointed Associate Professor in Human-Computer Interaction at DIKU from 1 June 2018. At DIKU he will conduct research in the area of novel interaction techniques for digital fabrication. 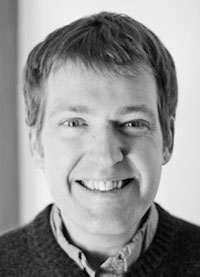 Within his overall research area, human-computer interaction, Daniel is focusing on new ways for people to interact with technology:

Daniel has a background in working with wearable and mobile computers:

- The goal of my work has been to allow people to be less focused on their technology and more engaged with the world - still reaping the creativity and productivity benefits of their devices, he says.

Recently Daniel has branched out into digital fabrication, such as 3D printing and laser cutting.

At DIKU he will carry out research into haptic interfaces and novel interaction techniques for digital fabrication. His recent work includes making 3D prints interactive through blowing to make sounds, enabling children to design 3D objects with embedded electronics, and investigating communities of 3D-printed prosthetic makers. His current projects focus on making 3D-printed objects interactive with embedded airflow, and understanding how novices undertake 3D design tasks. Daniel will also be looking to collaborate on multiple other projects, for example a tangible display made of a large matrix of jets of air.

Daniel is bringing along a PhD student to DIKU, who will be continuing to work on his research into making 3D-printed objects interactive by harnessing physical properties, such as sound.

Daniel holds a BSc, MSc and a PhD degree, all in Computer Science, from Georgia Tech in Atlanta, Georgia, USA. After finishing his PhD in 2010, he worked in industrial research for Nokia and Samsung, and in 2014, he joined the Rochester Institute of Technology (RIT) in Rochester, New York, USA, as an Assistant Professor. During his time at RIT, he founded and directed the Future Everyday Technology Research Lab (FETLab), supervising over 30 students at various levels. Together with the students, Daniel worked on designing, creating prototypes and studying interactive technology.