Functional programming, i.e. domain independent programming languages, is one of the research disciplines that has contributed to the high ranking worldwide of the Department of Computer Science at University of Copenhagen (DIKU).

The DIKU researchers presented two full papers at the rather exclusive conference, admitting only 40 articles, so the share of 5% was rather significant.

As a huge , the DIKU researchers' work was recognized by prominent researchers from other universities. For example, James Koppel (MIT) during his presentation of the article "Capturing the Future by Replaying the Past" repeatedly cited research papers by DIKU's associate professor Andrzej Filinski. 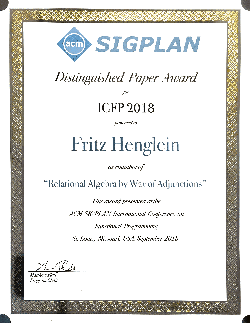 In addition to the above articles, DIKU researchers also presented articles at ICFP-related workshops: