Jon Sporring has been appointed professor in medical image analysis at the Department of Computer Science, University of Copenhagen (DIKU) as of 1 October 2018. 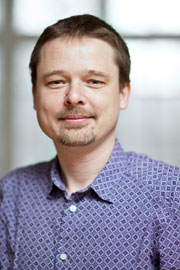 Jon Sporring works with basic research in mathematical and medical image processing, computer graphics, information theory, and pattern recognition. He is involved in several major, interdisciplinary research projects, for example: The Centre for Stochastic Geometry and Advance Bioimaging (CSGB), which is a Villum Foundation Centre of Excellence for basic research in stereology, spatial statistics and statistical image analysis. He is also part of the management of the newly established Center for Quantification of Imaging Data from MAX IV (QIM), which is a collaboration between the University of Copenhagen, the Danish Technical University (DTU), Lund University and the MAX IV Synchrotron facility in Lund.

- Modern imaging devices such as microscopes and synchrotrons provide data which are often too big and too complex for humans to analyse efficiently. The computer methods I develop offer novel, objective, and reproducible insights into such data, says Jon.

Presently, he is particularly interested in statistical relations between objects inside cells – ultrastructures – since these studies provide new insight into diseases such as stress and poses a computer modelling challenge. In his professorship, he will continue his work on image analysis for 3 and 4-dimensional image analysis with applications in biology and medicine.

The appointment is marked by a professor inaugural lecture on “From pixels to knowledge - Registering the big picture in data science" on 19 December 2019.

Jon Sporring has been employed as associate professor at DIKU since 2003. In 2007-2012 and again since 2015 he has been Deputy Head of Department of Research. He is affiliated with the research section Image Analysis, Computational Modelling and Geometry (IMAGE).

He received his Master and PhD degree from DIKU in 1995 and 1998, respectively. Part of his PhD program was carried out at IBM Research Center, Almaden, California, USA. Following his PhD, he worked as a visiting researcher at the Computer Vision and Robotics Lab at Foundation for Research & Technology - Hellas, Greece, and as assistant research professor at 3D-Lab, School of Dentistry, University of Copenhagen. In 2003, he became an associate professor at DIKU. From 2008-2009 he was part-time Senior Researcher at Nordic Bioscience a/s. In the period 2012-2013 he was a visiting professor at School of Computer Science, McGill University, Montreal, Canada. Jon Sporring also co-founded DigiCorpus Aps in 2012 and served as Chief research officer of the company from 2012-2016 developing computer vision-based systems for automatic feedback for physiotherapeutic rehabilitation.