PhD award of the year

The PhD prizes awarded by the Faculty of Science at University of Copenhagen, have been awarded since 2014 as a tribute to three excellent and rewarding PhD-projects completed during the preceding year. In addition to a diploma a prize of DKK 25,000 goes to each of the winners. 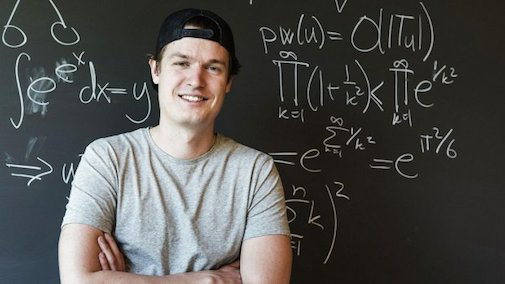 As a student at DIKU, Mathias Bæk Tejs Knudsen has performed research in many different aspects of the discipline, which is the cornerstone of computer science, namely algorithmics.

Mathias' dissertation deals with schemes and graph algorithms, both of which are categorized in the field of algorithms and hash functions, positioned in the interface between randomness in calculations and algorithms. Two of the most significant results which Mathias has contributed was an article about "Optimal Induced Universal Graphs and Adjacency Labelling for Trees.", which in addition to being admitted to FOCS was taken up in the journal JACM, which is the most prestigious journal in the field of theoretical computer science and occupies approximately 50 articles per year, as well as "Linear Hashing Is Awesome.", which was acclaimed as being among the 20 best results in algorithms at the conference 2016, and in addition, it was invited to the journal SICOMP which lies just after JACM in level. This article Mathias wrote alone.

"In Computer Science researchers are measured by their articles published in conference proceedings (in contrast to many other research fields). Mathias has during his study published 14 articles in level 2 series in the BFI list, which is quite extraordinary for a student, "explains professor Stephen Alstrup from the Department of Computer Science (DIKU). "These results delivered by Mathias have gathered acclaims from theoretical algorithm researchers all over the world. The assessment Committee at Mathias' , a.o. comprised of Turing Award winner Robert Tarjan from Princeton University (the Turing Award is the Computer Science analogy to the Nobel Prize). "

Amongst the many awarded during his study the grant of an Eliteforsk travel scholarship in 2016 should also be mentioned which brought Mathias on a research stay at Stanford University.

At the Department of Computer Science in Copenhagen Mathias has built a track record as a popular lecturer with visiting high school students, as a frequent Danish Championship Winner in programming with the team Lambdabamserne (three years in a row) and with good results also in North West Europe programming Championship NWERC with, among other things. a first place and previously also as the winner of the Olympic Games in Mathematics. More recently, in 2018 he qualified as one of the 20 best in the world for the final in Google's Distributed Code Jam in Toronto, held in August 2018.

When not participating in code contests, Mathias is today busy as CTO and co-founder of the company Supwiz that develops customer service systems for both private and public companies based on advanced algorithms and artificial intelligence.