Dave Cliff, professor of computer science at the University of Bristol entertained and enlightend a spell-bound audience on the socalled Flah Crash of May 6th 2010 and of the acronym: WTF

Behind this rather cryptic heading, a research story of epic dimensions was narrated to a mixed audience of Financial Sector representatives as well as DIKU students and researchers.

The acronym WTF was revealed to stand for: Why Technology Fails. But before reaching this insight the audience was taken through an interesting journey from early ERP research in the mid-1990's to progressing results within the field of robot trading mechanisms in electronic markets, applying still more complex computational parameters.

As a masterpiece of his research Dave has made experiments with agents-human interactions in the continuous double auction in electronic market places and demonstrated that robots beat the human beings at any time in the case of market predictions, thus contributing to a development where human traders at stock exchanges over the World are rapidly being replaced by machines!

The "Flash Crash" of May 6th 2010 was an incident where the Dow Jones index suddenly dropped dramatically overnight without no apparent reason other than "WTF". Dave drew parallels to former world-wide economic crises like the NY Stock Exchange drop in 1929, various space shuttle ignition failures, and - of course - the financial crisis of 2009 where several major banks crashed overnight.

Dave argued that the May 6th Flash Crash is evidence of what may become more commonplace in future, and is evidence to support the concern that in advanced economies we may already be reliant on large-scale complex IT systems that support critical social and economic functions, and yet for which we cannot predict their failures until it is too late.

Highlights from the talk 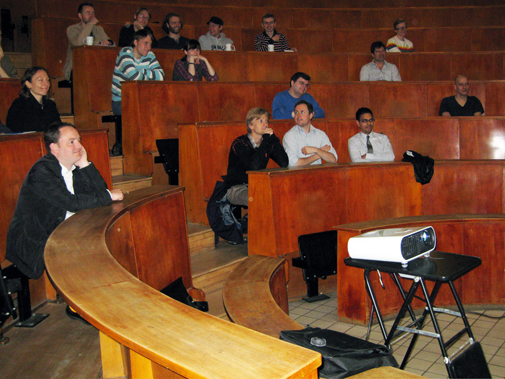