Jyrki Katajainen, Associate Professor Emeritus at the Department of Computer Science, University of Copenhagen (DIKU), passed away on 13 August 2020 after a long-term illness. He was 62 years old. 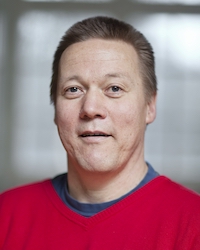 Finnish-born Jyrki Katajainen joined DIKU in 1991 from the University of Turku in Finland and has been affiliated to DIKU ever since. During the almost 30 years at DIKU, Jyrki Katajainen's research was centred on classical algorithm research and performance engineering. Together with his co-authors, he designed a wide range of algorithms and data structures that improved the best asymptotic runtime and space consumption to date for problems in sorting, geometry, data compression, data analysis, etc. Some of his data structures are described in Donald Knuth's The art of computer programming, which is considered a great honour.

For the last 20 years at DIKU, he was head of the Performance Engineering Laboratory, where he headed the development of efficient implementation of the algorithms in immediately usable program libraries, as well as a number of projects funded by the Independent Research Fund Denmark (DFF).

He has contributed to attracting several international conferences to Copenhagen, most recently in the summer of 2019, when the 22nd edition of the International Symposium on Fundamentals of Computation Theory was held at the University of Copenhagen.

A committed and ambitious teacher and supervisor

As a teacher, Jyrki was exceptionally committed. In his teaching, the students witnessed his entire emotional register. From great enthusiasm and joy to exclamations like "I hate this kind of research".

He was the kind of teacher who demanded a lot of his students and had a high level of ambition focusing on teaching them as much as possible about the subject and from as many different angles as possible.

Over the years at DIKU, Jyrki has supervised more than 35 master theses. A former master’s student says “Also as a thesis supervisor he was very committed and encouraging. He could sense when one needed feedback and when one could manage oneself. And there was no doubt that it meant a lot to him to end up with a good project.”. For the master’s student in question, this meant, among other things, that he wrote a research article which was accepted at a conference in Canada - this kick-started his research career.

One of a kind

In 2006, Jyrki published the book Reengineering a university department with his take on how a research department should be run. Because Jyrki knew what he wanted and did it - in his own way. He went his own ways, but always focusing on what he thought was best for DIKU.

Jyrki Katajainen retired just six months ago, after which he has been affiliated as an emeritus. He was one of a kind, someone that all research departments should make room for. He leaves behind six grown children: Mickel, Max, Maj, Sini, Eevi and Olli. Let us respect his memory.