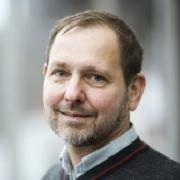 Søren Ingvor Olsen received his Master and PhD degree from the Department of Computer Science, University of Copenhagen, Denmark in 1984 and 1988 respectively. He was Assistant Professor 1988-1991 and hereafter Associate Professor at the Department of Computer Science, University of Copenhagen.  From 1996 to 1999 he was head of the department. In 2006 he was Visiting Professor at University Blaise-Pascal in Clermont-Ferrand, France. In 2008 he joined the newly started E-Science Center at the Faculty of Science. In 2009 he was responsible for the development and accreditation of the new cross-faculty bachelor education in Science and it (Danish: naturvidenskab og it). In 2010 he became head of studies (Danish: Studieleder) for Science and it. From 2013 to 2015 he served as member of the teaching committee (studienævn) for the mathematical and computational studies.