More than 100 alumni had signed up for the DIKU Alumni Day 2019 to listen to talks about Security on many levels. But first a general assembly was held to confirm the election of the preliminary Board: Ioana Mogensen (chair), Simon Søe Nissen, Gorm Raabo Larsen and Peter Carstensen were unanimously elected to set the direction for future activities in the new DIKU Alumni society. 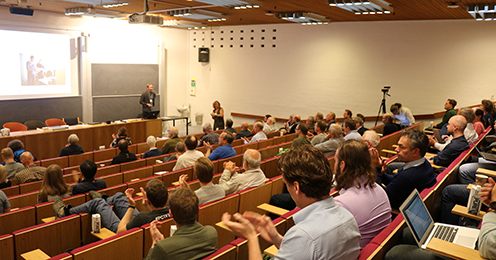 Security is a hot topic, perhaps more than ever - not the least amongst computer scientists. Security can be regarded from many perspectives - from the helicopter or from within a single algorithm. The invited speakers for the alumni day represented many different points of departures of coping with security - from Dean at the Faculty of Social Sciences Mikkel Vedby Rasmussen's philosophic, macroeconomic and historic journey through security policy of more centuries over Ken Friis Larsen's introduction to formal methods to Thomas Hildebrandt's ethically designed public case handling systems ending up with Henrik G. Jensen's data scientific approach to predicting security issues in Securitas.

Before diving into these topics, however, Head of Dept. Mads Nielsen initiated the show with his 'obligatory' 'What's new at DIKU' talk, emphasizing i.a. the impressive growth rate of DIKU (11 per cent over 5 years), the introduction of two new CS bachelor programmes (CS and Economy as well as Machine Learning and Data Science) not forgetting to mention the Departments impressive ranking in the European CS Ranking (no 14 in Machine Learning, no 5 in Natural Language Processing and no 3 in Algorithms & Complexity).

The event was and the talks are available as video clips below under the photos of speakers.

Are you a DIKU alumnus or alumna?

Visit our new alumni site (in Danish), where the DIKU Alumni regularly posts upcoming events and activities. If you have not yet joined the DIKU Alumni Society, you can do so on this page.