The research activities in the Applied Geometry group focus on using theory and techniques from the mathematical field of differential geometry to advance data analysis methodology. This happens at a foundational level where fundamental aspects of statistics of nonlinear data are investigated, in applied uses of geometry in e.g. shape analysis of medical and biological data, and on the machine learning side when defining models for neural networks that handles geometric data.

The book Riemannian Geometric Statistics in Medical Image Analysis (Elsevier, 2019) describes many of the complexities and challenges of working with geometric data with a focus on medical applications.

The group is connected to the Center for Computational Evolutionary Morphometry (CCEM) that focuses on shape analysis in evolutionary biology and phylogenetics.

For an updated list of people in the lab, see https://www.ccem.dk/people/.

Shapes appear in various forms in medical image analysis and biology, e.g. as 2D surfaces of the human hippocampi or curves representing the outline of a butterfly wing. Analysing the progression of shapes during diseases such as Alzheimer’s disease allows organ shapes to be used as biomarkers for diagnosis and prognosis. Shape analysis also has import application in morphometrics, the study of animal shape changes in biology. More generally, shapes can be considered any object that can be deformed, thus also including complex images such as diffusion weighted MR images in the category of shapes. Mathematically, shape deformations happen by the action of diffeomorphism groups, and geometry of the diffeomorphism groups and its subgroups therefore play important roles in shape analysis. Shape spaces are generally infinite dimensional nonlinear Riemannian manifolds, and statistical shape analysis must thus handle both nonlinearity and infinite dimensionality simultaneously. Focus areas of the work performed in the group is stochastic models for shape evolution and subsequent statistical inference of the parameters governing the stochastically changing shapes. This includes phylogenetic inference using shape data.

Geometric statistics concerns the statistical analysis of nonlinear data, particularly data residing in geometric spaces such as manifolds. Examples include shapes and shape spaces, tensors as observed in diffusion imaging, protein angles, and directional data. Even the most classical constructions in statistics, e.g. the mean value, are difficult to define in the geometric setting (for the mean, the fact that shapes cannot be added or multiplied by scalars immediately rules out the classic mean estimator of summing observations divided by the number of observations). We focus on probabilistic interpretations of mean values and covariance, and asymptotics of manifold means (central limit theorems of diffusion means). This includes stochastic processes on Riemannian manifolds, and bridge sampling on manifolds and shape spaces.

The software packages Jax Geometry and Theano Geometry showcases many of the geometric statistics constructions we work with.

We participate in international networks and fora including 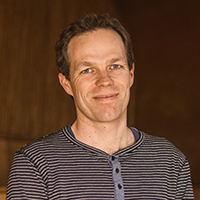